I learned today that Gerald “Jerry” Weinberg passed away yesterday. Despite being deeply sad by the news, I still wanted to use this moment for remembering what Jerry meant for me.

It took me quite a while to learn who Jerry Weinberg is. I think it was such late as 2012. Eventually I ended up reading - like many others - The Secrets of Consulting and Are Your Lights On?. And I rarely read books. There was just something on how those books were written. My thoughts were provoked and I wanted to learn more. Not just what Jerry had written, but who is Jerry Weinberg?

Besides Jerry’s Wikipedia page, one of the first steps on learning about Jerry’s past was to listen This Week in Software Testing podcast that had Jerry as a guest. It was recorded on 2010 by Matt Heuser and Michael Larsen if my memory serves me right.

Because of the complexity and worldwide nature of the system. I (Jerry) decided that we need to have a group of people dedicated to quality, including testing of the system. We created such a group, which is as far as I know, had never been done before. They lived through the whole project, unlike a lot of testing groups today. They were involved right from the very beginning. So, for example they could comment on whether the software we were building, was in fact testable, by then. Which wasn’t sure at all to just automatically happen.

Because this was, not only first human life system, but it was the first worldwide online system, ever build, and presented many unique problems in testing. That’s how we got into this. It was after that that other people began to realize they needed separate testing groups. But it became different. Our testing group was composed of experienced and talented software developers.

Later on, managers began to see testing groups as a way to hire cheaper people and put them in testing, because they didn’t have to know how to develop software. I’m thinking a lot of managers thought all they needed to do is sit in there on terminal and bang on keys, like monkeys. Of course that’s simply not true, but it’s taken us a long time, for many people in industry to realize, that testing is as professional, a job, as we realized it back, literally half a century ago. And many managers today still don’t understand that.

I ended up writing a blog post later about Project Mercury and Death of Testing as I felt we were coming back to where we started from with current modern testing teams. Not to forget development practices which Jerry discussed on Iterative and Incremental Development: A Brief History.

I was fascinated about the history of our craft what role Jerry had played in it. Thanks to Twitter, I was other times fortunate to ask where for example test cases came from 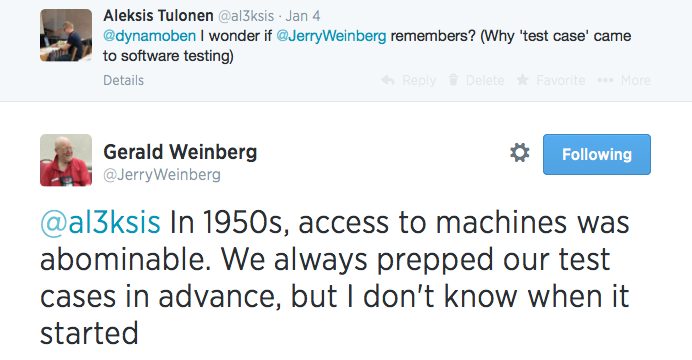 But the more I searched information on Jerry, the more I also faced PSL (Problem Solving Leadership) course being mentioned. I especially remember Let’s Test 2013 conference where Griffin Jones told me that I have to go there.

Years passed and I read more Jerry’s books, but that comment from Griffin never went away.

Fast forward to 2015 when I decided it’s now or never. Because I was changing the company I worked for, I wasn’t able to get my employer (well I didn’t felt it was right thing to do) to pay the course, even though they promised to pay it before I announced I’m leaving the company. I decided though to pay the course myself, despite it costing me 5000 euros. It was an investment to myself.

If you’re interested of Jerry’s past, there’s absolutely brilliant series of articles by Danny Faught. First post can be found from his blog by the name of First Interactions. From there on you can find the others. There’s at least 7 of them.

In March 2016 I flew to Albuquerque in New Mexico, US. Those 6 days in Albuquerque were full of learning and I still carry those with me this day. But that’s not I wanted to cherish today.

It was the moments I had opportunity to learn to know Jerry as a person. Like playing Scrabble (with interesting rules, to say the least) 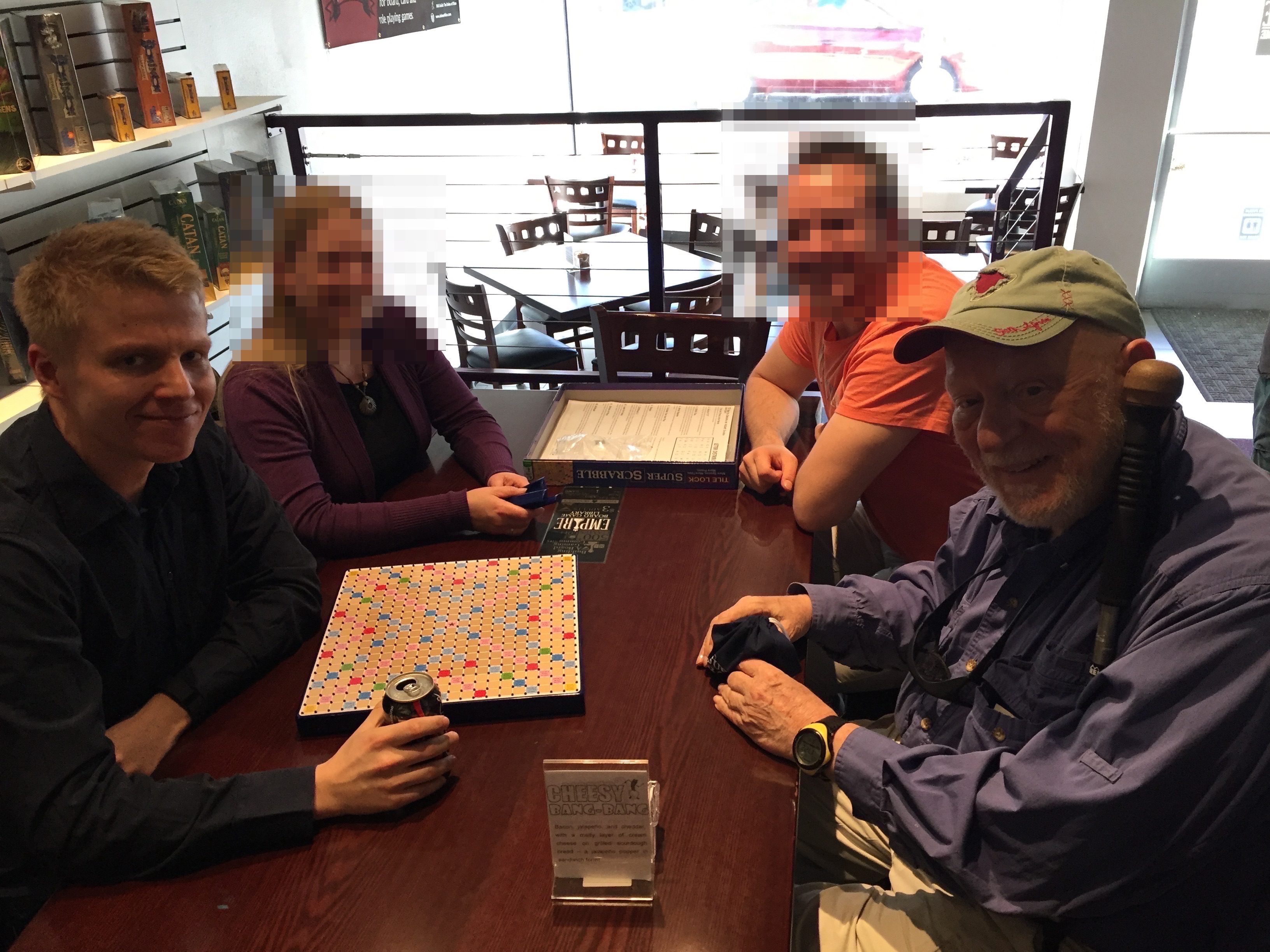 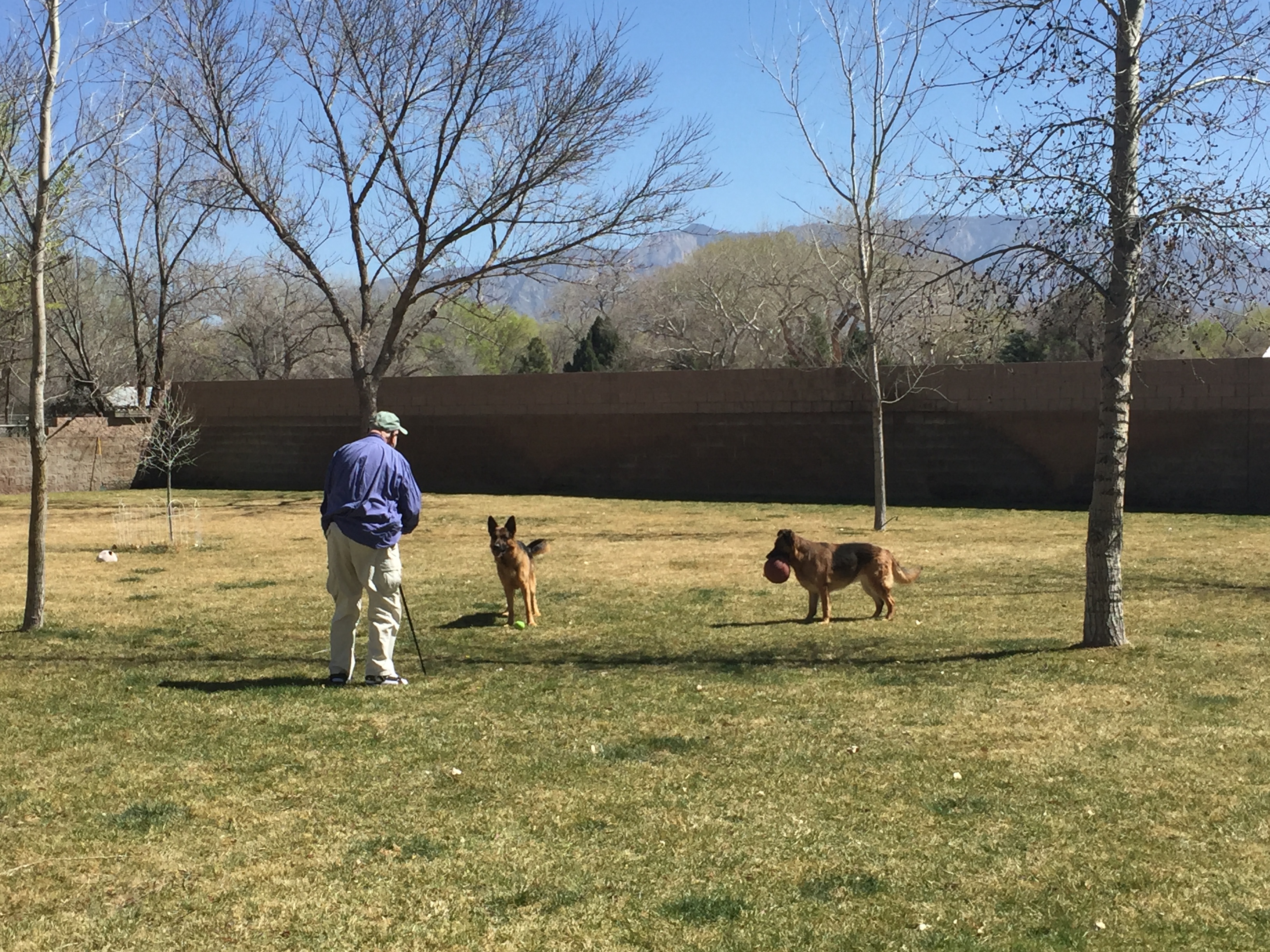 Many who come to PSL usually probably look answers that are related to our professions. Naturally that was one of the main reasons for me to come there also. But in the end I noticed that almost all our discussions were related to something else. And that something else was mainly Jerry’s relationship with Dani.

I wanted to understand how Jerry has been able to develop such a loving relationship with his wife. Through our discussions I found wisdom that has helped me on my own marriage and I feel great gratitude to this day. It also reminds me of the intolerable sadness that Dani must feel at the moment. I just hope she finds a way to carry that grief with her. While it doesn’t probably help, at least there’s many of us around the globe that are thinking of you Dani.

Maybe someone is also wondering what I learned from Jerry related having a healthy marriage?

There were many things I learned and the first one wasn’t a secret at all as it was communication. Courage to communicate feelings. Simple and such a hard thing in the heat of the moment.

Other thing I took from those discussions was the understanding on how we don’t know what state people are in. Not even our loved ones.

Jerry’s influence on me is right there after my loved ones. I can’t emphasize enough his impact on me as a person. How much I’ve gained empathy toward myself and those around me. How much I’ve developed my ability to observe. The list goes on and on.

I’ll keep reading his books and sharing his wisdom. In that sense Jerry will continue to live for decades if not centuries.

When we visited Jerry’s home, there was a sign above his front door. It said Pax Et Bonum, which basically translates to “Peace and the Goodness be with you” - I’m wishing that to Jerry and especially to Dani 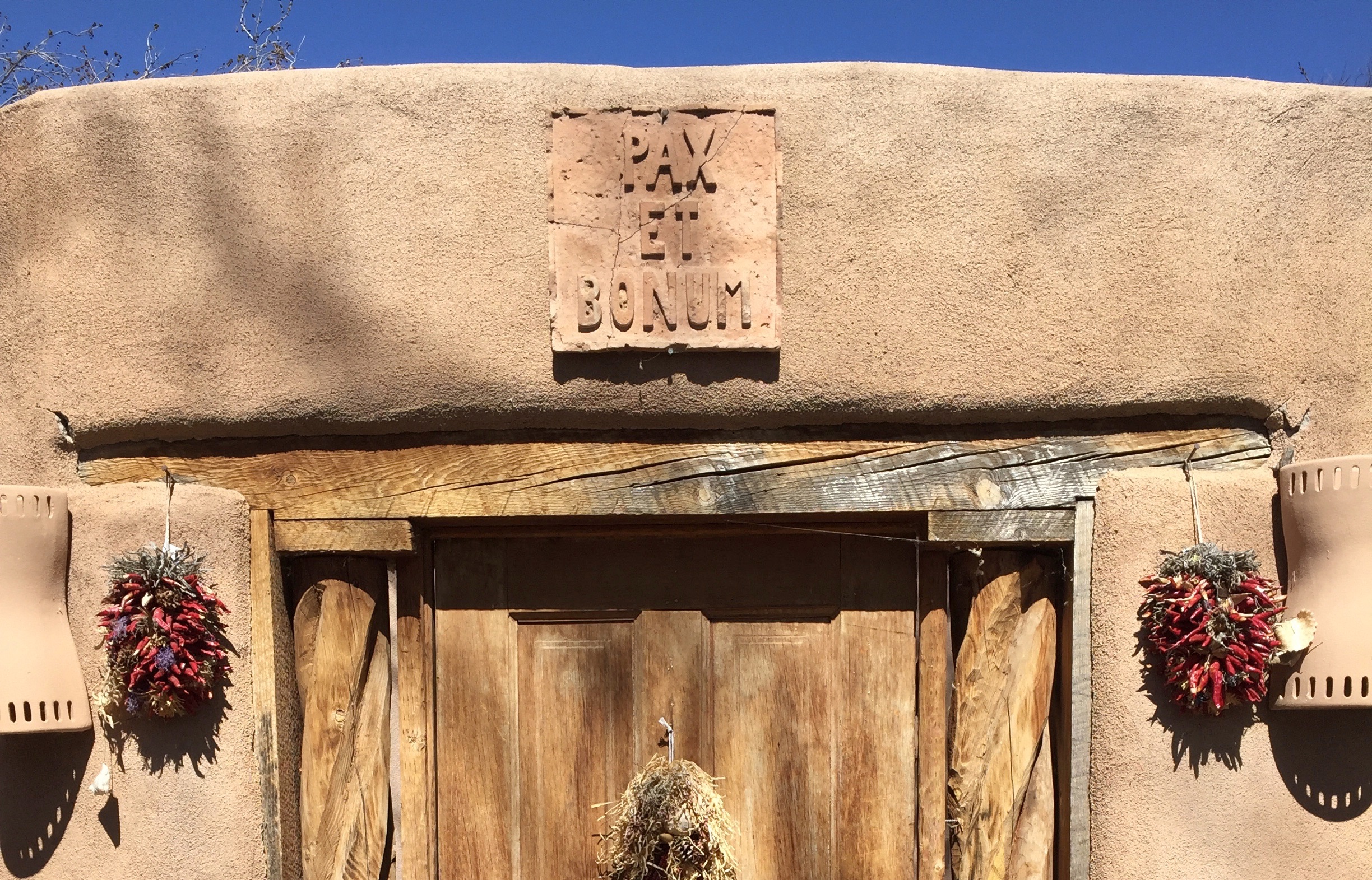